I spend a lot of my time on this blog writing about my adventures in book shops, but my local bookshop is the behemoth that is ‘Barter Books’ in Alnwick, housed in a Victorian railway station and one of the town’s main tourist draws. Needless to say, I’ve had a bit of a strained relationship with the shop (I’ve been going in there for over two decades). My disillusionment with the shop began before the spike in tourism to the area, it began when I was told that I was bringing in books that required specialist attention and as such I was going to be rationed to one lot of books per month, instead of week as it applies to any other member of the public.

Maybe I should explain – Barter Books operates a bartering system whereby people bring in their old books and the shop appraises them and offers them shop credit in return. It’s a nice idea in theory, but in practice rather imperfect. But the purpose of my blog today is not to give the shop any more publicity, but to show you simply how draconian they are should you dare to voice your dissatisfaction. A couple of weeks ago I wrote this review, on Google reviews, and posted it under my own name because I don’t hide behind pseudonyms. I gave the shop a three star rating and followed it up with this review:

I live just around the corner from Barter Books and I’m forever having to fend off people saying that I’m so lucky to do so. Sure, I go in here regularly but that’s only because it’s close and the North East of England is so lacking in secondhand bookshops. I can’t believe that in a large University city like Newcastle there is really only the Amnesty Bookshop on Westgate Rd!

Anyway, I’ve been going to Barter Books for over two decades and I do use their barter system – bringing in my old books in exchange for credit. But it’s all rather like a Victorian miner getting tokens for the company store. The books in the shop are extremely expensive to account for this unusual system, but rarely are you given anything near half (or even quarter) the shop value in credit. The last lot of books I took in I got £60 credit for, and the ones they listed online (not all of them) came to over £400. This is not to say they’ll ever see that £400, but that’s still a hefty mark up considering no money is changing hands, only barter credit.

The other issue is that if you bring in books of genuine interest or value, they are often sent to a ‘valuer’ (who in effect looks them up online). This service takes longer and when the shop is busy (as it always is now) it causes frustration to the staff. As such, I am limited to bringing in one box of books a month, whereas any other member of the public can bring in a box of anything (from Readers Digest / Book Club Editions etc) once a week without any problem. As regards staff, some are utterly lovely, but considering the shop has 50+ employees, there are a few attitudinal ones as well.

Because the shop has a bartering system (and I accept this is one of its main ‘USPs’) it means that they have an enormous pool of people with barter books accounts full of credit just waiting for a book to come in to pounce on and spend it on. As such, anything really rare or unusual often comes straight in and out of the shop and anything popular has a short shelf life too. In effect, you end up with an immense bookshop with over quarter of a million books, a lot of which are hard to sell, outmoded and stick around for ages.

The shop is also what you’d call a classic case of a ‘victim of its own success’, it is rarely a relaxing experience now to go in there, as there is a constant flood of visitors at all hours, in all weathers. Also, their laissez-faire, live and let live attitude regarding dogs has meant that a lot of the time dogs outnumber humans in the shop (and Northumbrian weather is often a bit dreich and rain and wet dogs indoors are not always a winning combination).

A lot of the people reviewing Barter Books on here will see it as charmed tourists, who visit for the day then leave. People like myself who live locally often have a rather different experience. I still use the shop regularly, but it is mostly now as a means of recycling books I’ve read and no longer have shelf space for, in the hope that I’ll find something to spend my credit on, rather than a recreational activity in its own right (which it really should be).

Conceptually and aesthetically, it’s a grand place, but in practice it leaves a fair bit to be desired.

Two weeks later I got this letter in the post (apologies for the blurriness): 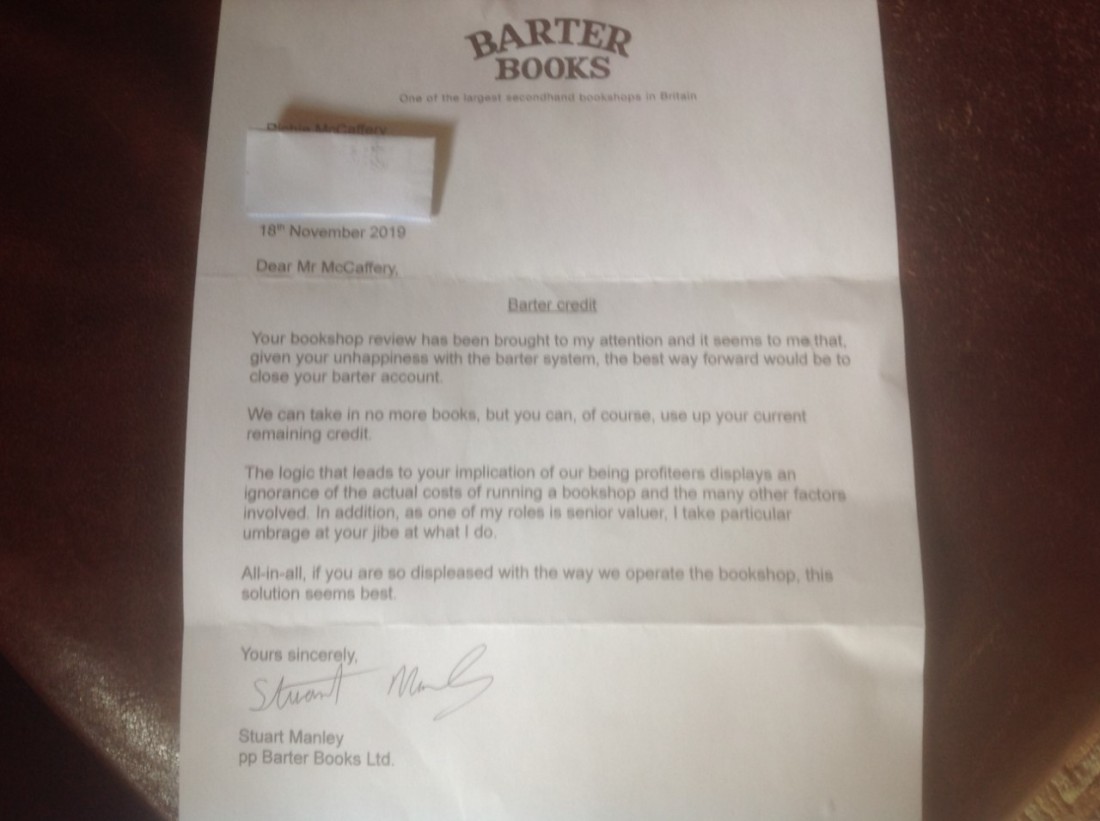 If this is my reward for simply writing an honest, and not even particularly harsh review, it begs the question ‘Why even have a reviewing system, if you are going to penalise people for being critical?’